Want to play the best online pokies in New Zealand? Find your favourites in our curated list down below! We've gathered all the top-rated pokies for NZ players on this page, from leading developers.

All the games found here have been optimised for smartphones and tablets from the ground up, creating the best possible gambling experience online. 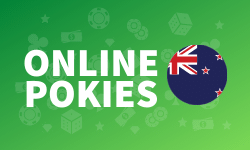 Do you want to know the history behind online pokies? Why they are so popular? And how you can find the best ones the market has to give? In this article, we cover it all.

But before we go further into this topic, let’s start things off by taking a minute to uncover the meaning behind the term “pokie” and where it originates from. Both Aussies and Kiwis use the local slang word “pokie”, and what they typically are referring to when they say it is “slot machine”.

But why “pokie” out of all words? Well, according to some sources it comes from pok in “poker machine” and it has since had its definition broadened to include slot machines as well. These poker and slot machines can be found in many pubs and clubs all around New Zealand, and are often the first-hand choice for people looking for a fun night out.

Technological advancements have brought us casino websites, thus, a shift from pokies to online pokies by NZ players was to be expected. Pokies online are, in comparison to other casino games, undoubtedly the most popular ones.

It doesn’t require any certain skill or knowledge to start enjoying pokies and that's part of the reason why they’re attracting a large number of players. There is almost an unlimited amount of pokies waiting for your attention and they’re usually made up by 3 or 5 reels.

Instead of searching the entire web for online pokies NZ sites, you’ll get your hands on premium options right here on Casinofrog.com/nz/. It’s just as easy as it sounds, pick a site of your liking, sign up and enjoy games produced by the most well-known developers in the industry.

It doesn’t take too much of an effort to enter an online casino and spin the wheels of a pokie. Behind the scenes, however, lots of effort is put into the games. There wouldn’t be any pokie games without the creative minds of developers and designers. They are the ones responsible for creating all of your favourite games and popular slots such as Mega Moolah, Queen of the Nile II and Retro Vegas.

Here’s a closer look at the biggest and most respected casino game makers in the scene:

The full business name is Aristocraft Leisure Limited and the company operates from Australia where it's manufacturing gambling machines. Aristocrat is one of the “founding fathers” of pokie machines which now have gone digital too, hence why you today will find classic offline pokies like “5 Dragons” online.

NetEnt began its journey in the mid-’90s and was founded by Pontus Lindwall, son of Bill Lindwall (acclaimed land-based video and slot machine entrepreneur). Today, NetEnt employs hundreds of people globally which makes NetEnt a major player in the industry of casino game developers.

In fact, if you’ve ever visited an online casino, chances are big you’re already familiar with one or some of the games developed by NetEnt.

From the Isle of Man, we have Microgaming, another world-famous developer with several hit titles under its belt. You might have heard of, or even played the likes of Mega Moolah, Immortal Romance or Terminator 2. If so, you already know that Microgaming is all about providing games with supreme graphics, superb sound effects along with high payout percentages.

BetSoft is a developer based in the casino island Malta and is most recognizable for bringing Jumbo Joker, Ogre Empire and Reels of Wealth to the world. This developer may not be as popular as the heavy-hitters NetEnt and Microgaming, but it’s still established enough to have games accessible through most casino sites.

Playtech was founded back in 1999 by Teddy Sagi and has grown to be one of the most successful game providers on the market. Since its launch year 1999, this company has steadily climbed the ladder of success and is today considered to be up there among the likes of NetEnt and Play’n GO. Playtech is one of the largest names when it comes to pokies, but that hasn’t made them lazy. Every now and then, a new slot appears that’s just waiting to be played.

Play’n GO is a pokie developer that was established and formed by Swedes in the late ‘90s. The company’s headquarters is located in Sweden, no surprise there, but Play’n GO also has offices in Hungary and Malta where most of the production occurs. By constantly adding mega-hit games to their catalogue they’ve reached a point where they have the privilege to pick whatever casino site they want to cooperate with.

Quickspin too is a Swedish developer of pokies, but a little bit of a newcomer compared to others in this list. The company was founded in 2011 and has since developed popular pokies such as Goldilocks and Treasure Island.

Maybe you've heard about pokies such as The Dog House Megaways or The Hand of Midas. Both games are developed by Pragmatic Play – the company based on Isle of Man that, although it was founded as recently as 2015, is one of the bigger names in the industry.

This Australian pokie developer based in Sydney has one of the most known names in the business. Not only because of the large number of high-quality games they’ve provided us with, but also because the company invented the popular megaways feature.

At Casino Frog, you will only find top-rated games for Kiwis from world-leading developers such as NetEnt and Aristocrat.

Pokies come in many different variations, but the three most known types are 3-reel, 5-reel and video pokies. All of these variations are based on the same premise – spin, cross your fingers and hope for a win. However, there are some differences that are important to know before you start playing.

3-reelers is what many players would label as “classic” pokies and these are very simple and suitable for those who are just getting started.

5-reel slots are a bit more complex with additional features and paylines. This means that they’re a bit tougher to learn, but there’s at the same time an increased chance of winning. So, in the end, it’s worth spending an extra minute of your time to get a grasp of the basics.

Lastly, we have video pokies, which basically are computerised versions of the more traditional pokie machines. These types of pokies are what you’ll commonly find when you play online. The foundation is the same, but to make the video pokies more attractive and diverse, in comparison to the two above, these include additional features such as scatter symbols and wilds. The different symbols can give you different advantages in the game. For example, you can receive free spins, activate multipliers, or be able to participate in bonus games.

Many video slots also offer a bonus round. If you manage to enter this, the adrenaline might kick in. Namely, this is where you have a shot of winning the big jackpot.

Also, almost no video pokie is like the other. When browsing the wide selection of pokies at a casino site, you’ll quickly realize how many different themes a pokie can be based on. These additions and themes make your gambling experience more exciting – and possibly more lucrative.

Players chasing the big wins often look for pokies with a progressive jackpot. These jackpots increase every time the game is played. After some time, the pot is filled with a great amount of cash that you have the possibility to win. A progressive jackpot can be found in 3- and 5-real pokies as well as in video pokies.

The first big shift took place when the pokies at pubs and clubs made their way online. Now, however, a new shift has taken place. While some people still prefer playing on their desktop, playing on your mobile phone, or smartphone if you will, is what’s trendy and hot nowadays.

What makes it so popular is the fact you can play wherever you’re located – whether it’s being on a lunch break or waiting in line for the movies. You can access the same games too most of the time, and win the same amount you would at a traditional desktop pokie.

In most cases, you don’t even have to download an app. Playing directly in your smartphone's web browser works just as well, if not better. However, if you prefer apps, those are available too. Many pokie sites have applications for Android, iOS as well as Windows phones.

Because many players nowadays prefer playing from their smartphones, the game developers put a lot of work into optimizing their games for a smaller screen. Mobile gambling, therefore, does not mean you have to compromise on quality.

Are you excited and ready to try your luck but unsure whether or not you want to spend money right away? Then it might be a wise choice to start by playing on free online pokies. This is possible thanks to that many online casinos and pokie developers offer demo modes of the games, which players can enter and play just for fun. Here, you can spin the reels without having to put any money at stake.

This of course means you can’t win any money either, but playing for fun will give you a better understanding of the basics and make you feel more comfortable before moving on to playing for real money.

Have you had enough practice? If so, scroll up to find and play the best pokies online for real money in our table of casino websites.

Where can I play online pokies?

New Zealanders can play at any casinos site that is based offshore. As there are literally hundreds of options it can be a little overwhelming finding the one for you. However, thanks to comparison sites such as Casinofrog.com you’ll find your favourite in a second.

How high is the payout percentage?

The payout percentage varies a lot between pokie games. Landbased pokies have a minimum RTP of 87% while online games have an average of 97%. What you must remember is that there are no guaranteed wins and it’s purely based on luck.

What games are the best?

It depends on what type of games you are after. Examples of popular titles are Book of Dead, Gonzo’s Quest and Fruit Shop.

Is my safety ensured while playing pokies online?

It sure is. Our recommended casino websites take its players' safety very seriously and do everything in their power to keep you safe.